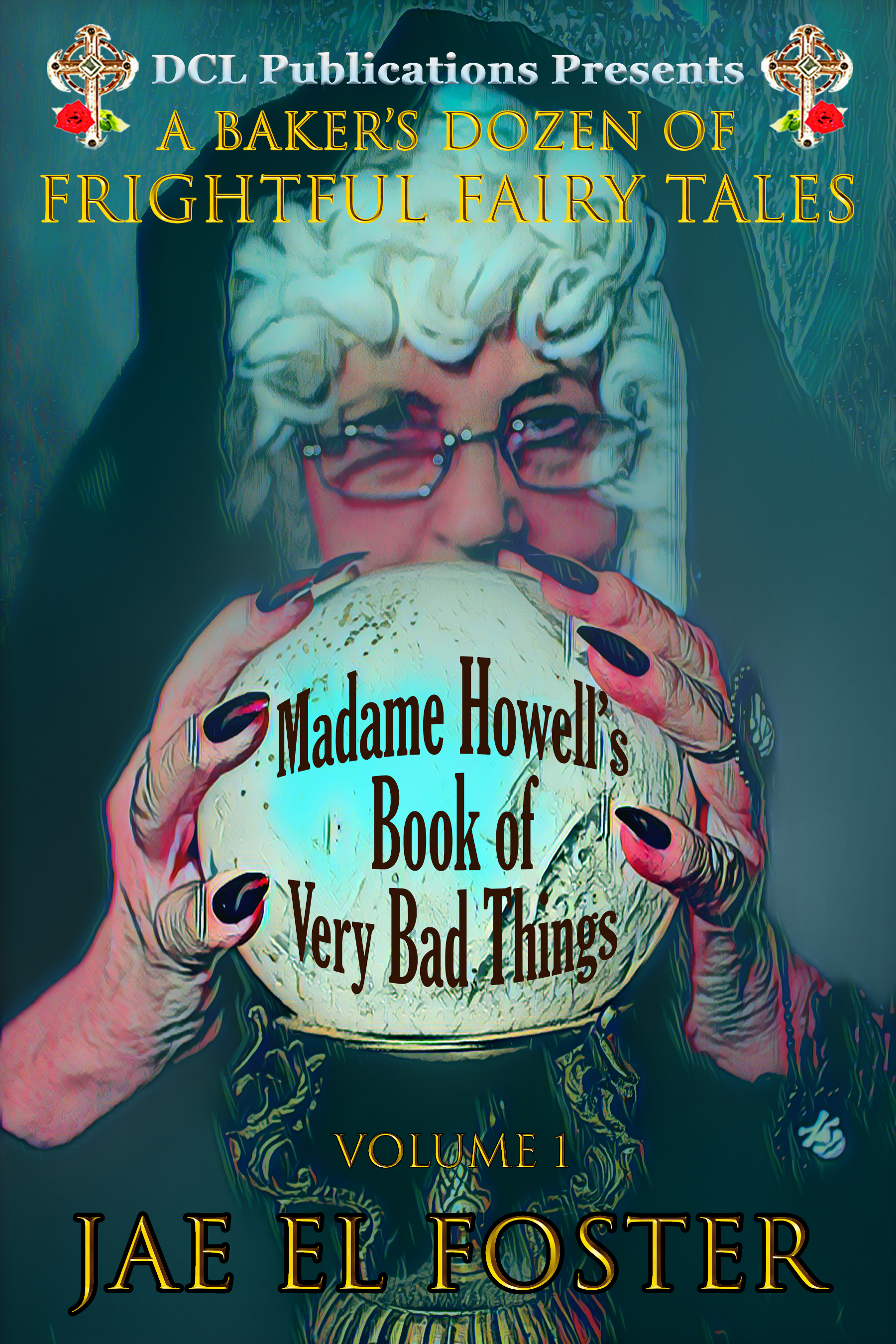 Journey into a land of fairy tales like none you’ve ever experienced before with this baker’s dozen of original and often horrific fanciful treats! Madame Howell, the world’s greatest witch, will lead you through some of the most unique journeys into the Enchanted Forest, through great castles and villages, and even into uncanny realms of newly imagined dangers in her ‘Book of Very Bad Things.’ Featuring many elements from classical fairy tales while paying homage to the imaginations of the Brothers Grimm, this deliciously sinister volume delivers its own unique versions of true love and the all important ‘happily ever after.’ Within, you’ll discover dark changelings, wicked queens, houses of snakes, disobedient children, the world’s tiniest people, vicious goblins and dwarfs, a baker with a taste for blood, and so much more. Settle back and fall under the wicked spell of this dastardly and mesmerizing journey into the darkest realms of fairy tales and folklore.

From the story ‘The Woman with Wings’

Once upon a summer afternoon, a brother and sister went frolicking in the woods, in search of berries and wildflowers. Their parents were long dead, and so it was up to them to scavenge for their food every day. They enjoyed making games of it, like chasing one another through the winding forest paths or even pelting each other with berries that were rotten on the stems.

It was raining on this particular afternoon, and the siblings became wet and muddy as they played and hunted their food and foliage.

“Sister,” the brother called in warning as she glided swiftly across the slick mud, “ye shouldn’t run so fast near there! That hill be steep!”

“Bah!” she squealed, giggled, and spun around in a circle. “It’s lovely to slip and slide! Join me!” She squealed again and spun once more. Then, she lost her footing and tumbled backward. Brother watched as she fell off the ledge, tumbling down the hill.

“Sister!” he shouted and then slipped and slid his way to her in a hurried but cautious manner. “Sister, are ye alright?”

Brother looked over the ledge, staring down as he watched his sister roll to the foot of the hill. He began after her but came to a pause as a winged creature swooped down from the sky and gathered Sister into its grip. In the blink of an eye, the creature swooped upward again with Sister in tow.

“Sister!” he cried out again and watched as the creature carried his sister to the great forbidden mountain, which was a good day’s trek away by foot.

Distraught, the brother contemplated how to save his twin sister. He knew he would have to venture to the forbidden mountain and climb its dangerous terrain. Once he found his sister, he would also find the creature that had taken her. Surely, a battle would ensue. Before going after his sister, he had to be well prepared.

From the story ‘Jacob and the People Tree’

Today, for the first time, he decided to bypass that lovely and relaxing stone. He wasn’t by any means tired or ready to relax or nap. He felt energized and chipper, and he was surrounded by his woodland friends… his only friends, but friends who welcomed him into their domain with seemingly open arms.

“Oiko, doiko, ba dunk dunk dunk,” he sang cheerfully to himself as he strolled down the path – a path that grew narrower the further he walked. “Watch out for the stinky skunk!” It was a silly song he sang – one he’d made up long ago on a walk such as this, where he’d encountered a skunk that fortunately hadn’t stunk.

As the path grew narrower and the forest thicker, everything became darker – shrouded in shadows. Several of the flowers and plants nearby glowed when shadowed, and they helped to make the scenery more mystical and brighter. Never before had he seen such glowing plants as these. They were remarkable and glowed softly in a vast array of color. He knelt down to one such flower and sniffed it, wondering if it smelled as marvelous as it looked. It was, indeed, the sweetest scent he’d inhaled in perhaps forever.

He stood and sighed. It felt like he’d found a sort of nirvana – a land of beauty and wonder. It was so magical that he yearned to bring a part of its splendor home with him. Crouching down once more, he leaned to the flower he’d sniffed and started to pluck it.

“I wouldn’t do that if I were ye,” he heard a voice say. It startled him, and Jacob unhanded the flower and stood upright.

Turning around, he looked for the voice’s source but saw no one. Deciding it had been nothing more than his imagination playing some tomfoolery on him, he shrugged it off and turned back to the flower.

“Ye should never pick anything from here,” the voice spoke again, and once more, Jacob turned around to see its speaker.

Again, there was nobody.

“Perhaps I am going mad,” he contemplated aloud and then chuckled. “Ah well… being so lonely can do that to a man, I imagine.”

“Mad!” another voice noted, mimicking what Jacob had said. Whilst the first voice had sounded male, this one sounded like the voice of an old woman. “Ye will know mad if ye pick one flower from this path!”

“Who said that?” Jacob asked, looking all around. Still, he saw no one. For a moment, he considered he was hearing the voices of ghosts, but if a ghost was going to speak, surely it would have shown itself. “Where are ye?”

Everything was quiet again as he sought for the mysterious voices. He looked all around and even down low, but he could find nobody. When he was about to give up in his search and leave this place behind, he heard giggling from above.

From the story ‘The Baker’s Dozen’

He lifted her into his arms and carried her up the road to the bakery. Once they were inside, he sat her on a stool and grabbed some cloths from the back. With one of the cloths, he cleaned the blood from the wound. The other, he tied around her leg, putting pressure on the cut and stopping the bleeding.

“Oh, Mister Baker, I do not know how to thank thee,” she said to him as he stepped away to throw the bloody rag into a pile with other dirty rags. “I cannot imagine anyone else showing me such kindness.”

He noticed he’d gotten some of her blood on his fingers as he’d cleaned the wound. He stared at his fingers for a moment and then rubbed the blood between them. Coyly, he sniffed them. The blood had a unique scent to it – one that he’d never really thought of before. Curiously, he licked a bit from a finger and tasted it. It was surprisingly sweet and delicious.

“I do not know what I would have done had ye not come around,” the young woman continued from the front room. “Everything felt so dire! Ye be a saving grace for certain!”

“Think nothing of it,” he said slowly and almost too lowly for her to hear as he looked at the remaining blood on his fingers. Swiftly, he licked the rest away. “Ye may need to have that sewn up.”

“It will be fine,” she replied as he stepped back into the room. “I have come to accept some things.” She smiled. Her words were curious, but he thought she was lovely, even if she did have a few additional cuts and scabs on her face and hands. Her blood was immaculate though… delicious.

“Nourishment first,” he told her and took a piece of pound cake from his counter top and handed it to her. “Eat this. Ye must be hungry.”

“How gracious!” the peasant exclaimed and accepted the pound cake. A moan slipped from her lips as she ate it.

Also from the counter, the baker took his bread knife. While the woman was distracted with her treat, he came around behind her and pulled her hair back. The knife sliced through her neck before she had a chance to make a sound. When she did try to scream, it was low and gargled.

From the story ‘A Heart Unfrozen’

At the moment, the Queen sat upon her ‘traveling throne’ on the platform that stood as a political stage in the center of the village square. Two young lovebirds stood before her, each with a guard positioned behind them. They were guilty of kissing behind the castle and had been caught by Mathavious, Queen Estella’s most entrusted guard.

“I see no use in debating this matter,” the Queen said to the charged. “Ye shall lose yer heads. Guards!” She looked toward the uniformed men standing behind prisoners. “Take them to the chopping blocks!”

The executioner’s chopping blocks sat several meters away from where the Queen was currently perched on the platform. Nearly everyone in the village was present for the event, as it was mandatory for many who were in attendance. The platform itself had been built in such a way that no matter how an execution was performed, it could in some way be seen by anyone and everyone, from presumably any angle.

As expected, the accused protested their sentencing, but Queen Estella had heard it all before. Every sob story – every excuse plausible. None were forgivable, as she had made blatantly clear over the years. Her rules were not to be broken, and those who did were subject to punishment.

The young man and his young female lover were forced down onto the chopping blocks, and one by one, the royal executioner silenced their pleas as he chopped off their heads.

Down to the audience, the heads rolled. For a moment, they stared up at the spectators and blinked repeatedly until their brains finally died. Then, their expressions went still – frozen in time.

“Would anyone else care to lose their head today?” Queen Estella asked in a loud and enthusiastic tone as she stood tall and prominently. “I would like enjoy my midday tea as quickly as possible, so please… do speak now if ye have done anything blatantly unforgiving. I will not be so kind and yer deaths will not be so swift if I find out someone is withholding their guilt.” 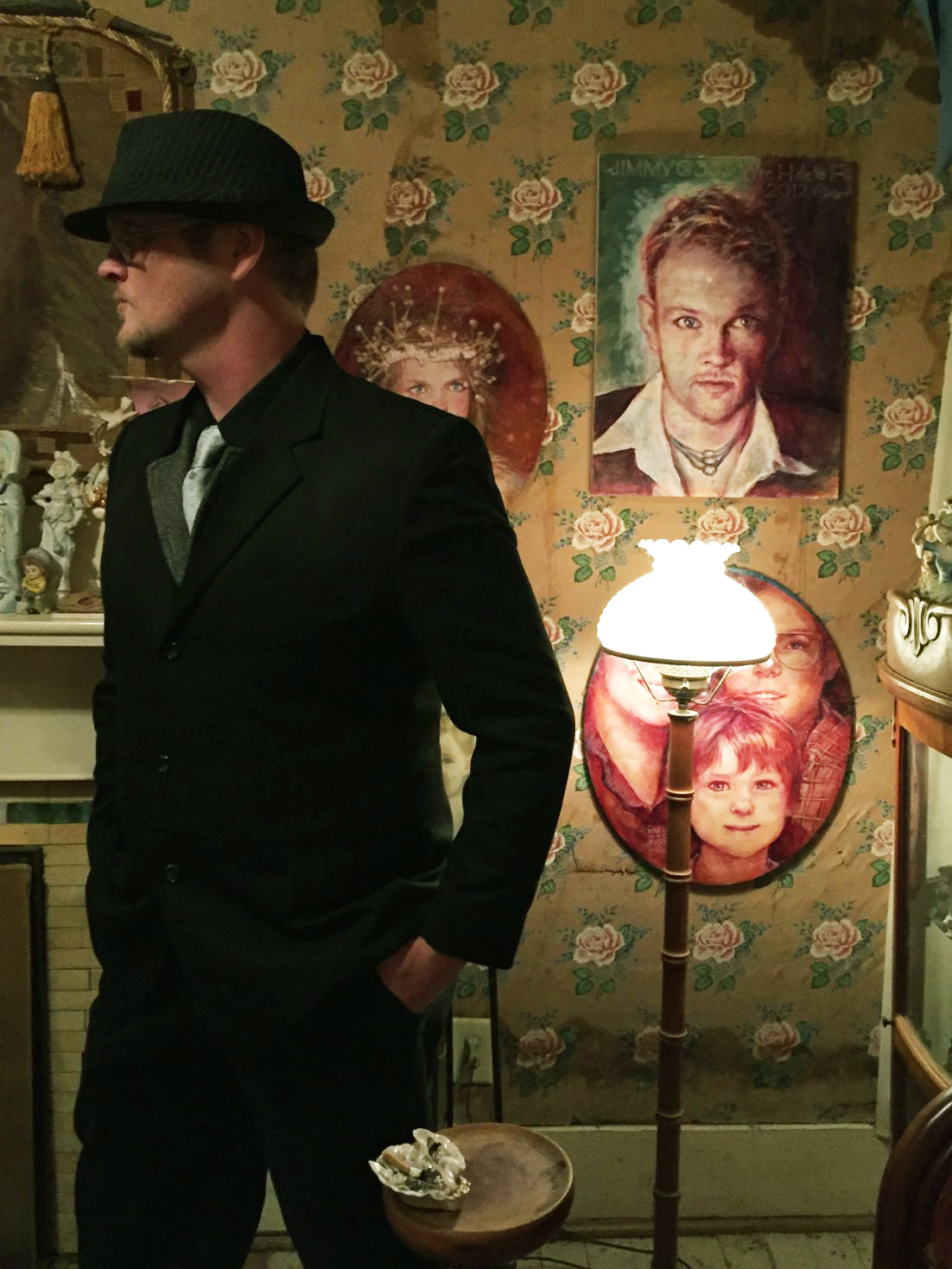 When the muses speak, Jae El Foster writes, and he has been doing so for nearly twenty years, tackling some of the most intriguing genres out there. Delivering fresh, incomparable tales of horror, science fiction, and romance - sweet or spicy - he pens with seasoned skill the tales that his muses deliver to him. His bestselling works include the paranormal romance ‘Restless,’ the gothic horror tale ‘Where the Demon Is,’ and the gay holiday romance ‘Only at Christmas.’ Follow him on Instagram @jaeelbooks and 'like' him on Facebook at http://www.facebook.com/authorjaeelfoster.