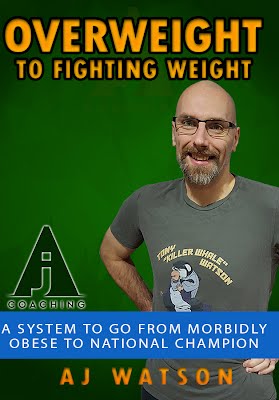 Looking to lose weight but everything has failed? Discover the physical and mental aspects of becoming a much healthier you, written by someone that dropped 80kg!

Get the weight loss system written by someone that went from zero exercise and over 175kg, to a multiple time Australian and Pan Pacific martial arts Champion.

AJ Watson has shed 80kg in his journey and for the first time shares how he did it, and what needed to change mentally and physically to achieve his goals.

This book will teach you how to:

AJ Watson’s approach tackles the issues from multiple angles giving a much greater level of success than diet alone. Treat yourself to a wealth of knowledge and kick those extra kilos goodbye.

AJ discusses his physical and mental states throughout his journey, and how he combated multiple challenges to attain results. Because he has been there, AJ understands the thought process of overeating, obesity, a sedentary lifestyle and low self-esteem. His successes as a martial artist, coach and author are traced back to the struggle out of his lowest point.

Now you can benefit from that struggle as well.

Finding time to write is a challenge. My full time job takes up my day and my martial arts coaching fills my evenings. The irregular pattern of free time means I need to make copious notes when ideas hit me, and I can incorporate them when I find time to write. Often I need to spend an hour reading my previous work to get back into the correct mindset and continue the book. It means I generally don’t suffer writer’s block, but the books take far longer to complete than I’d like.

I don’t have an iPod or any Apple product (Android through and through). I don’t really listen to music outside of the car. That is mostly heavy metal but I have an eclectic taste. I enjoy Metallica, Slipknot, Avenged Sevenfold, Korn, Classical Music, Queen, Guardians of the Galaxy Soundtracks, Jimmy Barnes, The Corrs, Michael Jackson, Evanescence and a heap of others. I tend to use music to adjust my mood for what I’m about to do. Driving to the gym to teach or train I want to be pumped so heavy metal goes to the top. I have used classical music to mellow me out if angry or if I am writing an especially emotional scene. That is rare though.

Nothing formal. I tend to ask a few people to read the book and give me feedback once completed. My wife is the exception though. If something feels off with a scene, or if I’m particularly proud of one, I get her to read and critique it.
For my novels I have an unusual critique process. If I have an idea I generally create a similar scene or plot for my regular role-playing-game group. During gameplay they will usually find any plot holes I need to fill, and their reactions to the scene or characters shows me where I need to improve. I then take what I need into the novels.

The Dirk Gently series from Douglas Adams. I’m nearly finished so will be seeking something new soon. My tastes change often and lately I’ve been after older classics like Fahrenheit 451, Brave New World and anything from HP Lovecraft.

I was constantly running Dungeons and Dragons games (as well as other RPGs) and found a lot of my plots were dropped as the game changed direction or characters died. Instead of ignoring them I had the idea of mixing them into a coherent story. In primary school we had creative writing and I always felt I sucked at it. The feedback on my first draft changed that perception as everyone I showed it to, friends and strangers alike enjoyed it. So I continued the tales.

It’s a new series called The Inquisitor Qyr Chronicles, fitting into the universe I created in my previous trilogy. It is a blend of fantasy, a touch of sci fi, wrapped in a detective blanket and set in a western era. The first book is Arson’s Canvas and tours a rich world filled with intrigue and running on elemental power.
Qyr is an Inquisitor for The Trust, the law enforcement agency of planet Volyce. He loves his job investigating serious crimes in a town not far removed from the frontier status during the rush for mining ore. One thing he loves more than his job is his privacy.
However that is threatened when a murderer destroys a monastery in a blast of fire only the greatest practitioners of the elements could muster.
The wanton destruction exposes secrets of several powerful organisations as Qyr conducts his inquisition. Secrets that shake the foundation of even The Trust itself.
That pales to the personal conflict for the Inquisitor. His extensive history is filled with details best left to the past. Balancing between privacy and duty, Qyr must learn the secrets of his birth before they attack the life he has built.
Who can he trust with enemies encroaching on all sides, even among those seeming to help?
Inquisitor Qyr chronicles his journey so he can understand a choice that will impact millions, and kill millions more.

The book is ready for the final draft and I’ve started on its sequel. 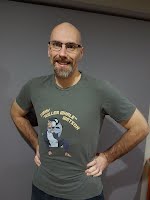 AJ Watson (Tony to his friends) lives with his wife Barbara in the great state of Victoria, Australia.
AJ is a certified Life Coach and continues to expand his skills to assist others not only duplicate his successes but to clear any mental barriers people place upon themselves.

Tony has obtained a Bachelor of Computing and although he has a love of technology, he can’t help dreaming of worlds with vicious creatures and powerful metaphysics. He uses this imagination to write sci fi/fantasy novels.

Tony is an experienced martial artist competitor and instructor, having won multiple national gold medals and assisting others to do the same.

In his spare time, among other things, Tony dabbles in computer graphics and GMs many role play games with his family and friends.

Posted by EverLeigh at 6:25 AM