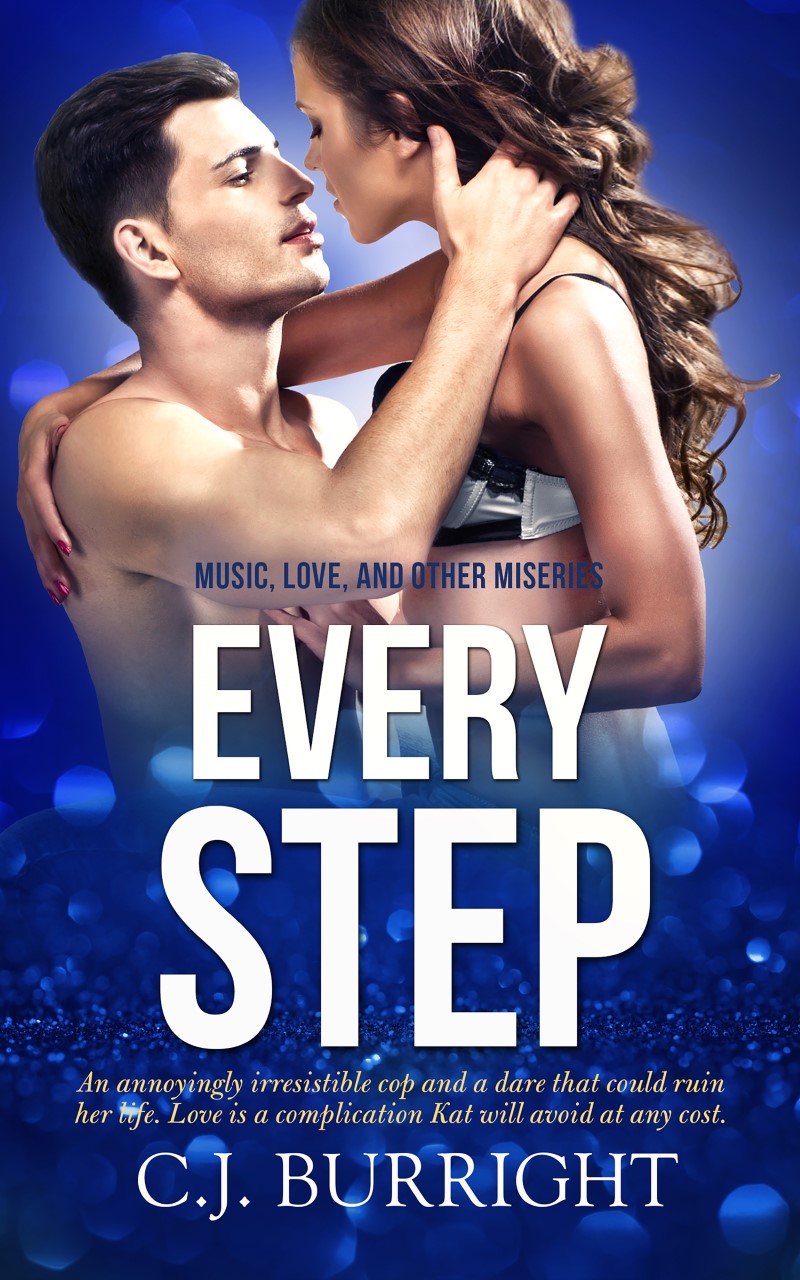 An annoyingly irresistible cop and a dare that could ruin her life... Love is a complication Kat will avoid at any cost.

Sharp-shooting cop Katerina Hellman needs a fresh start. Leaving behind a failed marriage, she ditches the city and bunks with her sister in the tiny town of Graywood. When the local police chief offers her a position as the temporary firearms instructor, she jumps on it. So what if it's a mostly boys' club? She's done with men, doesn't need their unrealistic expectations and not even the tall, dark and annoying badge Roman can change that.

Roman Farkos lives for his job, to serve and protect...until Kat shows up with her snarls and superiority. He can't resist pushing her buttons. She wants to be considered one of the boys, which would be fine if she didn't stir a desire to do more than protect and serve her. Kat may be raw from her recent split, but Roman resolves to convince her that love—preferably with him—is worth the risk.

When Roman challenges Kat to a six-week contest of wits and skills, it's game on. As they work and play side by side, her resistance fades and unexpected passion flares. But when big-city danger hits and secrets are revealed, Roman faces the greatest challenge of all—convincing Kat that real love is worth the fight. 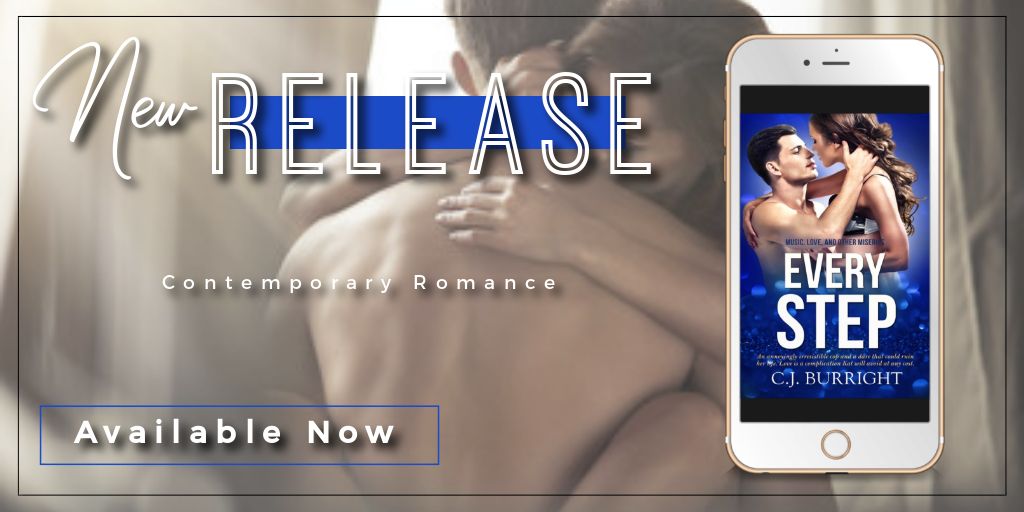 A year or so ago, my husband decided to convert a portion of our downstairs into an apartment for a rental (our kid is gone and our house is BIG for only two people), but I had a conniption fit because my beautiful, built-in bookcase, specially created by my talented pal Aaron) was in that part of the house. Giving it up wasn’t happening. 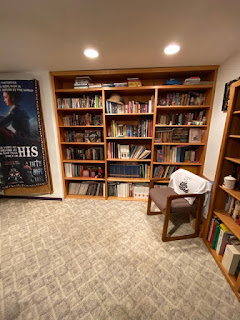 Using my questionable persuasion skills, I convinced Hubs that it was a perfect time to make my own writing cave. Being an amazing husband (and one who values his future by keeping me happy), he agreed…but I had a few specific requirements—I wanted it private, soundproof and, most importantly, secret.
And this, my friends, is the result. Behold:  my secret bookcase door leading into my lair. You have to pull the correct book to enter and no, I’m not sharing which book it is, although there may or may not be certain titles that offer hints. My busy-body cat, of course, had to get in the photo. She’s half of my terrifying cat duo, Slinker and Stinker. They seek and destroy pretty much anything. 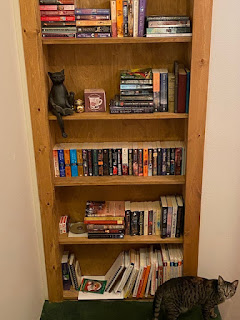 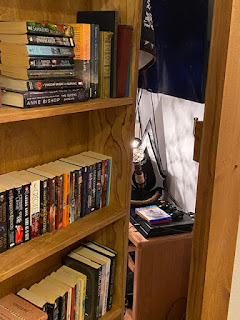 I soundproofed as much as possible with wall hangings and bookcases. With the secret door closed, the distractions are at a minimal…as long as I can keep my Pinterest surfing focused on research purposes only. FYI Henry Cavil makes for some fine research. Yeah, I’m an unabashed Witcher fanatic, and I may sometimes use my writing hole to play videogames in peace. Shh, don’t tell. 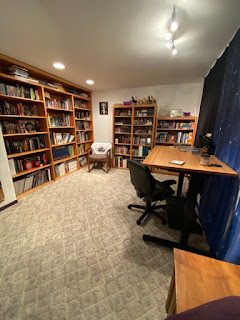 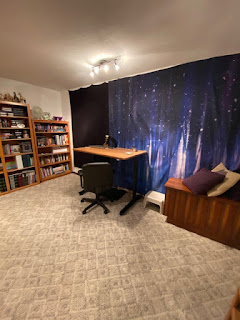 I love my Uplift desk and having the option of sitting or standing while I write. I also love my Dragon dictation program. Speaking into the microphone and letting it translate my words onto the page saves my wrists and hands. I’m on the computer a lot at the day job, so Dragon has been a lifesaver. 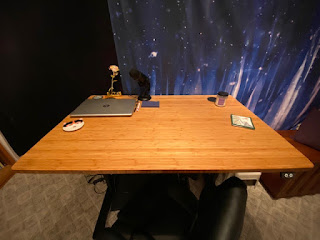 And I love my candles! I recently found Wick & Fable, which makes literary character themed scents, such a fun idea, and they smell fantabulous. I bought the Rowan candle (one of my many book boyfriends from Sarah J. Maas’ Throne of Glass series) even though Lorcan is my fave. Sigh. Love my grumpy Lorcan. It ain’t too hard to tell who some of my favorite authors are, huh? And don’t be fooled into believing that this consists of my entire book collection. I have bookcases scattered all over the house, but my most precious treasures I keep here. Where they’re safe from predators. #bookprotector And last but not least, in honor of my love (aka obsession) for Assassin’s Creed, my artist buddy Nolan created this cool lamp. If I’m writing a dark scene, I can turn off all the other lights and pretend I’m in a dungeon…you know, the kind that has coffee, candles and electricity. If you’re into photography, you should totally check out Nolan’s work—he’s super-talented. 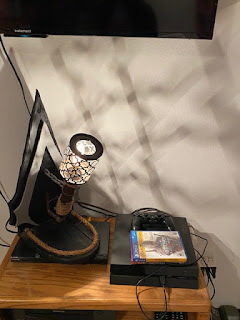 My next remodeling project will include a trapdoor outside my secret door to eliminate unwanted visitors, but for now, I’m quite pleased with my hideaway. Thanks for tagging along on my writer space tour! 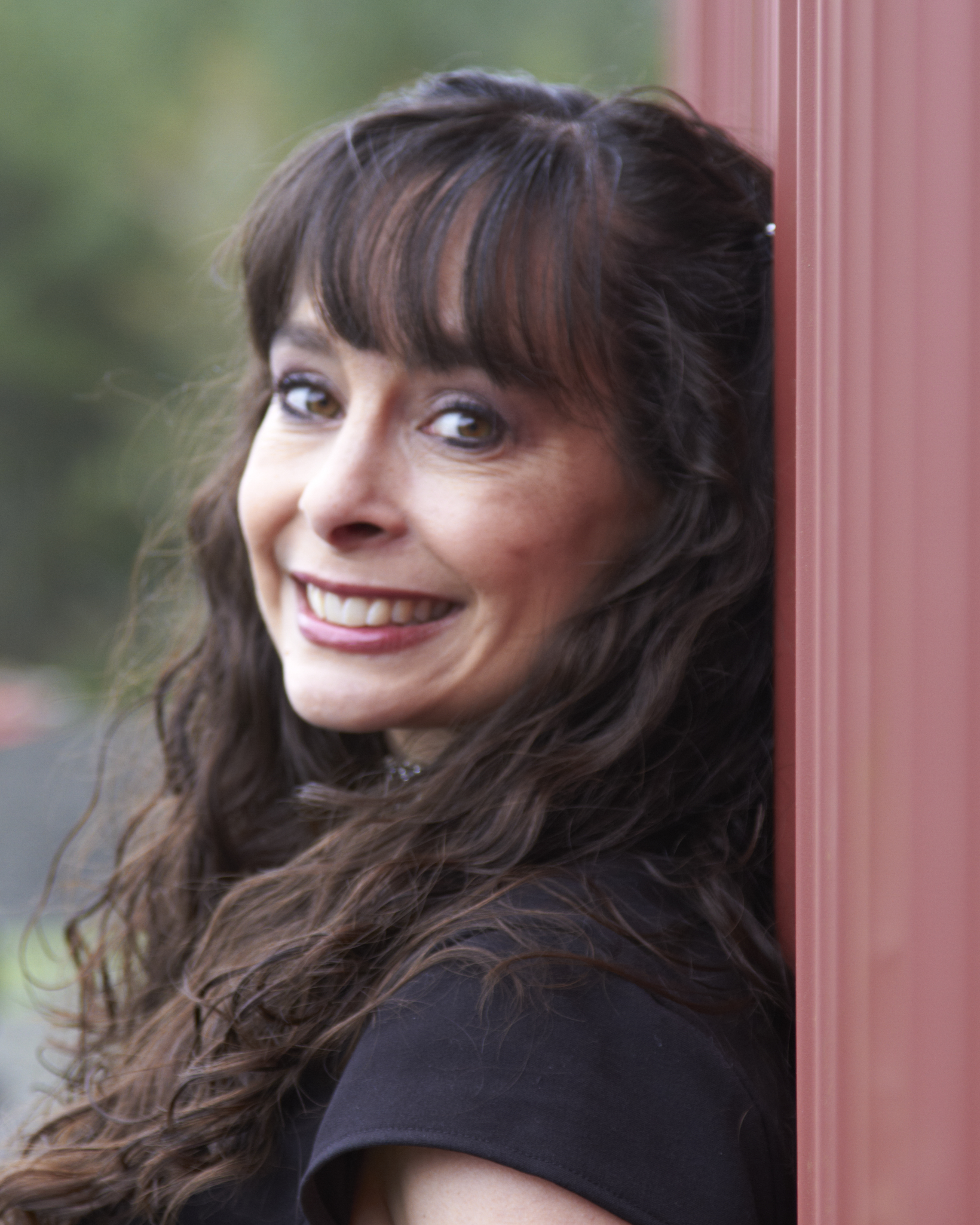 C.J Burright is a native Oregonian and refuses to leave. A member of Romance Writers of America and the Fantasy, Futuristic & Paranormal special interest chapter, while she has worked for years in a law office, she chooses to avoid writing legal thrillers (for now) and instead invades the world of paranormal romance, fantasy, and contemporary romance. C.J. also has her 4th Dan Black Belt in Tae Kwon Do and believes a story isn’t complete without at least one fight scene. Her meager spare time is spent working out, refueling with mochas, gardening, gorging on Assassin’s Creed, and rooting on the Seattle Mariners…always with music. She shares life with her husband, daughter, and a devoted cat herd.