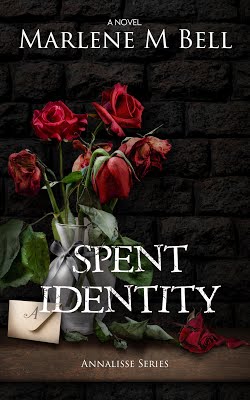 Antiquities appraiser Annalisse Drury drives to her family farm in upstate New York to consult with Aunt Kate about her troubled relationship with Greek tycoon, Alec Zavos. When Annalisse arrives, she learns the beloved farm she expects to inherit is for sale.

That same morning, they find a stranger’s body decaying in the barn. Then her aunt vanishes.

In Spent Identity, Annalisse and Alec join forces for the second time. They must find the mastermind behind her aunt’s abduction before Kate’s health issues worsen. Was the corpse in the barn a coincidence or a warning? The clock ticks for Annalisse to find her aunt and repair what she has left with the man she loves.

The most difficult part about writing the Annalisse Series is setting up the foreshadowing for plot twists where they make sense to the reader. I like to hold the reader from guessing who the villain is and how each book will end. SPENT IDENTITY is full of twisty sections in the story!

I’m a child of the 1960’s and ‘70’s with its vinyl LP’s, tapes and CD’s. I’ve never used an iPod and don’t own one. Once in a while, Spotify in the background on my PC may add some inspiration to my writing, but for the most part, I prefer complete silence as I write. In the case of music for ambience, each scene will dictate the kind of music I listen to. Soft instrumental jazz is my favorite overall music standard while sitting at the keyboard.

Yes, but I now limit the number of advance readers prior to publication for all of my new books. STOLEN OBSESSION had soooo many beta readers, critiques and edits over eight long years. Too many, I realized. Lots of cooks DO ruin the stew if you’re not careful. Readers and editors have personal pet peeves, and every person will find fault in different sections or conflict in the same chapters— enough to make a writer crazy, rewriting paragraphs. The process is so subjective that I usually stick with one consistent critique partner and three to four editors— from developmental to substantive to copyediting and a proofread. I tend to self-edit entirely too much as it is. I’m working on that.

One of my editors recommended that I read the first three books in the coffeehouse mysteries by Cleo Coyle. I’m a couple of chapters into book one, ON WHAT GROUNDS. It seems that readers of series books like to have quite a bit of backstory woven into each book to catch up on the earlier action. These coffeehouse books will be useful to see how Ms. Coyle drops breadcrumbs in small bits along the way in her series without a feeling of spoilers. Just enough backstory— in case readers haven’t read the first of my books and beyond.

In the early 1990’s when my husband and I were the Community Leaders for a local 4-H group in Bakersfield, CA, many of the parents asked me to write a book on raising sheep. (We are Horned Dorset sheep breeders.) In 2009, purely for fun, I published AMONG THE SHEEP in an unusual way, blending my personal journal stories with a how-to-raise-sheep section at the back of the book. The memoir is currently out of print because it was more of a bucket-list item for friends and family, not particularly suitable for the basic sheep raiser who is after animal husbandry tips. I’ve considered rewriting that book in a more straightforward manner and launching it in the future, in my spare time! My journey into authoring romantic mysteries began in 2010 with book one, STOLEN OBSESSION.

The third book in the Annalisse series is called, CALICO RAVEN. Main characters, Annalisse Drury and Alec Zavos travel to the Cayman Islands and Italy on a quest to find out more about Alec’s deceased father, Pearce Zavos. Their plans are complicated when they encounter a murdered woman on the island. The bad publicity ends the sale of Alec’s family business and throws his relationship with Annalisse into another round of turmoil. Stay tuned for more “REVEAL REALITY” tabloid mischief, and meet a quirky Mafia mob boss who’ll go to great lengths to find a calico cat and keep his family secrets buried. 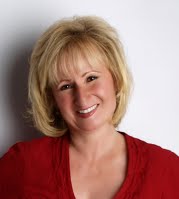 Marlene M. Bell is an award-winning writer and acclaimed artist as well as a photographer. Her sheep landscapes grace the covers of Sheep!, The Shepherd, Ranch & Rural Living, and Sheep Industry News, to name a few. SPENT IDENTITY is the second book in the Annalisse Series.

Her catalog venture, Ewephoric, began in 1985 out of her desire to locate personalized sheep stationery. She rarely found sheep products through catalogs and set out to design them herself. Ewephoric gifts online can be found at https://www.TexasSheep.com. Her books at: https://www.marlenembell.com

Marlene and her husband, Gregg, reside in beautiful East Texas on a wooded ranch with their dreadfully spoiled horned Dorset sheep, a large Maremma guard dog named Tia, along with Hollywood, Leo, and Squeaks, the cats that believe they rule the household—and do.