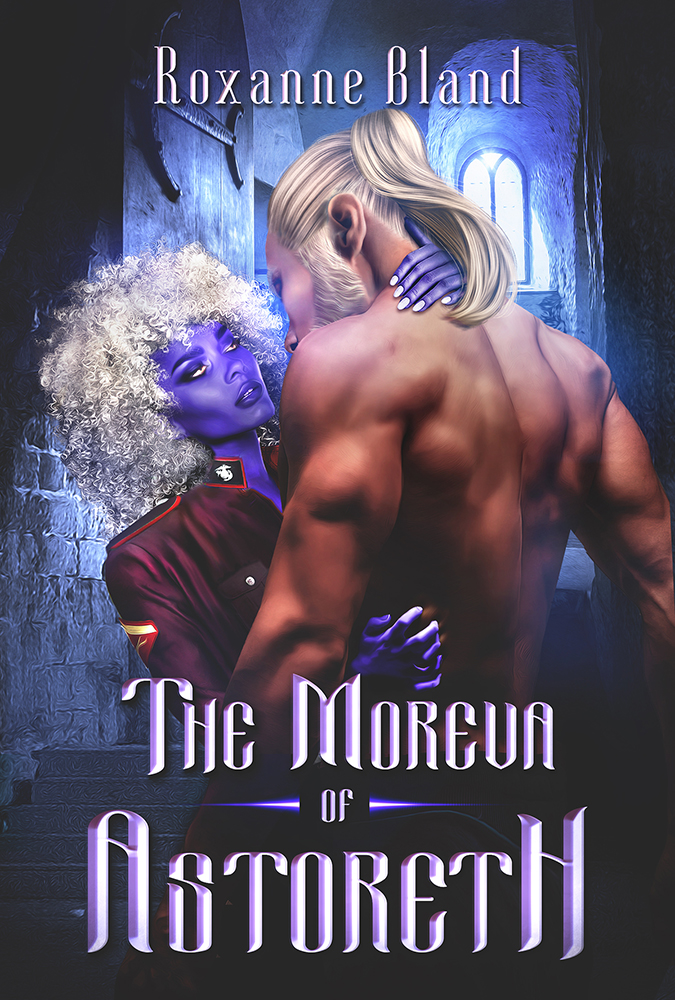 And the price of her love could be her life.

"Bland may very well be the Alice Walker of science fiction." The reviewer is Vincent Dublado, Readers' Favorite.

"This is perhaps the most entertaining science fiction novel I have ever read." Rabia Tanveer, Readers' Favorite.

The Story Behind the Story

The Moreva of Astoreth, a science fiction romance, has its roots in a game a friend and I played in college. We collaborated on a story, taking turns. I don’t recall the details of the story—it was more years ago than I care to remember—but it went something like this. A woman, the daughter of a king, is exiled from her homeland in the desert because she refused to marry a man her father had picked out for her. She travels north, seeking a village that will take her in, but all turn her away. After many adventures, she arrives at a village that admits her. The chieftain is enamored, but doesn’t want his people to know since she’s a stranger. The princess genuinely dislikes him. After being at each other’s throats, she eventually falls in love, and the chieftain confesses his feelings. They marry.

The king, now remorseful, gathers his army to look for her. They wander from village to village, but don’t find her. Deciding she must have headed north, he turns in that direction. Still no luck. He keeps looking. Finally, they arrive at the village where she is living. The king demands that she come home. The princess refuses, saying she is now married and will never forgive him for what he’d done. Of course, the chieftain takes her side. The king threatens war. The chieftain accepts, and the story ends with the deaths of our happy couple.

Years later, I read Zecharia Sitchin’s Earth Chronicles series. He posits that ancient astronauts—the Annunaki—from the planet Nibiru came to Earth looking for gold. While here, they created humans to use as workers, and founded the Sumerian civilization. Sitchin has his loyal adherents, and his scholarly detractors. But whether one believes it or not, it’s quite a tale.

More years later, a novel I was writing at the time was giving me fits. I couldn’t figure out where to go next. So, I started playing the “what if” game. “What if he does this? What if she does that?” When I think of something, I noodle it through to see if it makes sense. If it does, I start writing. If not, I keep going. Problem was, I wasn’t getting anywhere. I leaned back in my chair and let my thoughts wander. They settled on my college days, my friend, and the story we’d written. Then I started thinking about Sitchin’s works. Then I had an idea. Could I meld them in some way?

And then, like Athena from Zeus’s head, the story’s outline came to me fully formed. An interesting development because I never outline a story first. Filing it away for future use, I took up my work-in-progress again. But I couldn’t get on with it. The outline I’d created kept knocking at my brain, and wouldn’t let go. I finally put my WIP aside and started writing The Moreva of Astoreth.

Here’s the funny part. I’d planned the story to take place in the spring of the planetary year—four months. I reached summer, and thought I’d finished, time to write “The End.” But my characters had other ideas. They wanted the story to continue. I thought it’d just be a couple of months, something like that. No. By the time they’d finished with me, the story spanned a year—spring to spring, sixteen months.

Award-winning author Roxanne Bland was born in the shadows of the rubber factory smokestacks in Akron, Ohio but grew up in Washington, D.C. As a child, she spent an inordinate amount of time prowling the museums of the Smithsonian Institution and also spent an inordinate amount of time reading whatever books she could get her hands on, including the dictionary. A self-described “fugitive from reality,” she has always colored outside the lines and in her early years of writing, saw no reason why a story couldn’t be written combining the genres she loved and did so despite being told it wasn’t possible. Today, she writes stories that are mashups of paranormal urban fantasy, romance, and science fiction, as well as other speculative fiction genres.

Posted by EverLeigh at 9:19 AM