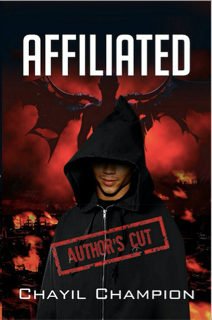 Ever Dance With The Devil? 14 year-old Tajalik Stokes is a member of the 17th Street Serpents, a murderous gang in Chicago. After losing his brother to gang violence, Tajalik becomes defiant and violent in his own right. Nonetheless, Tajalik begins to wrestle with his pride when he is confronted with the gospel of Jesus Christ by his peculiar guidance counselor, Alfred Justice who tries to mentor him. Yet, Tajalik’s egotism and disobedience land him in a “Dante’s Inferno” experience at the gates of hell. Now, in agonizing pain, misery and regret, Tajalik finds himself in a realm of darkness trying to figure out answers as to how he got there. In this Author’s Cut of Affilaited, Champion weaves together the same elements from the previous edition, while streamlining the storyline to fully immerse the reader into the domain of the streets where good and evil are oftentimes hard to discern. 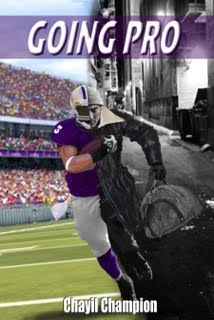 Enoch Zoles is an agnostic, egotistical, collegiate football star, primed to make millions of dollars as a professional football player. But a one-night stand with a seductive vixen leads to a downward spiral of devastating events, which cost him his reputation, his promising future, and his freedom. And, after experiencing an unexpected tragedy, Enoch wants nothing to do with the God his coach and mentors keep talking about. After repetitive visits to jail, he meets a mysterious inmate who challenges his humility, integrity, and faith—right down to the core of his spirit. But will it be enough to save him from a dreadful end?

The hardest part about writing my books is searching for that new element that nobody has used in their writing. There are so many good authors out here, so tapping into a new realm of creativity and coming up with something totally off the cuff is challenging. However, it is a challenge I welcome, because we live in a world where people are afraid to “reinvent the wheel” and the world of entertainment seems to be searching for something new and captivating to the reader. As an author, that is my goal; to give the reader something brand new in plot, climax, and character.

What songs are most played on your Ipod?
Hahaha…I am a huge listener of Gospel Rap. A lot of the artists I listen to aren’t really heard of in the mainstream circuit of music because they don’t get radio play, but their music is positive and high quality. Gospel rappers like Bizzle, Lecrae, Trip Lee, Eshon Burgundy, and Canon stay in heavy rotation on my Iphone.

Do you have critique partners or beta readers?
Yes, I do. I have a team of people who are really meticulous who comb through my books. It wasn’t always this way and you can tell from the first book I wrote up to my latest book the difference in my writing style. My critique partners are critical too. They’re not afraid to tell me, “Yo, Champ, this sucks. Take it out.” Lol; that’s the type of people you need on your writing team.

What book are you reading now?
I am currently reading Destiny Revealed by Cris Pasqueralle. It is awesome! It’s like a Harry Potter feel but more modern and without the use of wands. It’s exciting!

How did you start your writing career?
I was a English/Journalism double major in college, so my love for writing has always been there. Nonetheless, I didn’t start writing books until I moved to Los Angeles, California in 2009. I had jut left the education field as a vice principal and felt inclined to launch my writing career once I moved. The creative itch inside me was dying to get out after being suppressed for so many years after I graduated. I haven’t looked back sense and I love sharing my stories with the world.

Tell us about your next release.
I am so excited about my next release! It is actually a follow-up to my most recent release. Majesties of Canaan: The Secret of the Oramite is the follow up to Majesties of Canaan: The Goliath Project. The book will be dropping in the spring of 2017. The Superhero novel is a new genre in the world of literature and I am definitely having a lot of fun creating new characters and storylines in this ongoing series. If the world likes these types of books, then I will continue to write it. The seven super soldiers that I introduce to you in the first M.O.C. novel continue their quest against supernatural evil and a devious dictatorship government that is threatening the Middle East and ultimately the entire world.

Chayil Champion is a graduate of the University of Miami in Coral Gables, Florida where he double-majored in both English and Journalism while competing as a two-sport athlete in both football and track. After graduating from UM in 1998, Champion received his masters and doctorate degrees in education from Nova Southeastern University in Fort Lauderdale, Florida. He embarked on a career in education as an English teacher and vice principal in South Florida’s Dade County and West Palm Beach County public school systems respectively before moving to Los Angeles, California in 2009.
A native from Evanston, Illinois, a suburb that borders Chicago’s north side, Champion developed a love for writing at a young age which carried well into his adult years. After penning his first book in 2009 upon his arrival to Los Angeles, Champion has gone on to write five more books, which include the Young Adult fiction novels, Affiliated and Going Pro, both from The Lost Souls literary series. Champion also wrote Exiting The Wilderness and But He Said He Was A Christian, two nonfiction Christian self-help books. His latest book, Majesties of Canaan: The Goliath Project is a Young Adult, super hero novel. It is the first book of many within the Majesties of Canaan Superhero Series and the second book of The Dark Spores Series where Champion has partnered with best-selling authors Keshawn Dodds and Braxton Cosby to form the new superhero universe and to collaboratively pen the upcoming superhero novel Infinity 7 due in early 2017.
Outside of his love for writing, Champion, runs his own education consulting company in Los Angeles where he continues to teach and tutor students. In his free time, Champion focuses on fitness as he is a gym rat, frequents movies, and enjoys spending time with his daughter Vanessa.

a Rafflecopter giveaway
Posted by EverLeigh at 6:06 PM 1 comment:

He Who Seeks Power, Seeks Destruction.

Over 1000 years ago, nearly all the ancient wizards were destroyed after the Wizard Wars. However, the one who started the War still remains, having worked his will in secret. If he can find the last Dragonwand, he will regain his powers as the dark dragon. Unaware of the Dragonwand or the betrayer, sixteen-year-old Markus is looking for a wizard who will give him a letter of recommendation for the College of Wizardry. During his journey, he stumbles upon Tolen the Wise, who sends Markus on a quest to end the darkness and find the Dragonwand before it gets into the wrong hands. As Markus discovers growing powers and makes allies, will he find what he needs to complete Tolen’s task, or will the ancient, dark wizard uncover the Dragonwand and forever change the fate of the land of Gallenor?

Daniel Peyton is a fresh author whose talents includes, writing, sketching and dreaming out adventures in faraway places that he seeks to bring to paper. He lives in East Tennessee where he draws a great deal of inspiration from the unique landscape. He has been featured in short story e-zines as well as flash fiction blogs. Legacy of Dragonwand: Book I is the first book in the Dragonwand Trilogy. Outside of authoring books, Daniel is an award winning cook, artist, and embroiderer. He is a distinguished member of the Sigma Alpha Iota, and often can be found teaching classes at his church. Before he began seriously devoting himself to becoming a published author, he spent over ten years traveling the country as a member of the Miyagi Ryu Nosho Kai dance school, performing Okinawan classic and modern dances.

a Rafflecopter giveaway
Posted by EverLeigh at 2:00 AM 1 comment:

SALE: These Novels on SALE for Cyber Monday! @RABTBookTours #sale

Click on any of the below book covers to be taken to the page that has more information on the novel as well as the Buy Links!

Posted by EverLeigh at 12:00 AM No comments: