What college girl doesn’t dream of meeting Mr. Darcy? Lizzie was certainly no exception. But when Darcy Fitzwilliam comes into her life, he turns out to be every bit as aggravating as Elizabeth Bennett’s Fitzwilliam Darcy. So what’s a modern girl to do?

Jeanette Watts’ satire pokes loving fun at Jane and all of us who worship the characters who shall forever be our romantic ideals.


What is the hardest part of writing your books?
Knowing when to stop editing! I will write, then rewrite, then re-rewrite. About then I feel it's "ripe" enough to let other people see it. I have a stable of smart friends who read my early drafts, and give me great feedback. Even after 5 or 6 people have edited, and proofread, and I edit and proofread between iterations that I send out to friends, inevitably on the last pass someone STILL finds missing punctuation, or a plot hole. Sooner or later, I have to close my eyes and jump in the pool.

What songs are most played on your Ipod?
Waltzes! I am a dance teacher. Never mind that hideously ugly box waltz that has dominated the last half of the 20th century - it was the Queen of the Dances for a reason! I have waltz music from 1803, and Cradle of Filth's Nymphetamine is a waltz - when I edit out the time signature changes!

Do you have critique partners or beta readers?
Lol!  Yeah, I guess I've already sort of talked about that. My friends are great, and insightful, and all of them find different things that need improvement. Always find people smarter than you to be friends with. I want to be the dumbest person in the room. You learn so much at parties that way!

What book are you reading now?
A biography of J. Pierpont Morgan. My next novel is going to be historical fiction set in New York around the turn of the century. I usually write historical fiction, this next story is getting insistent.

How did you start your writing career?
I'm going to tell you a story I have never told anyone during a book tour before... In high school, I was on the staff for the school newspaper. I wanted to edit the whole newspaper, but the faculty advisor put me in charge of the editorial page, because he said "You know how to think." I had no idea what he was talking about. Now I can tell you I still don't know if I'm much of a thinker, but I have a lifelong habit of asking questions. I get in trouble for asking too many questions. I ended up creating a controversy on the school paper for asking questions.  I wasn't in trouble with the staff, but I wasn't too popular with my own senior class, because I put it in writing that "Party More in 84" was an inappropriate slogan for a class that was mostly serious, college-bound, studying hard, and playing hard at sports, theatre arts, and other extracurricular activities in their spare time. I didn't see much partying going on. Or maybe I just didn't get invited. Not the best way to get an invitation, pissing off your classmates.

I still ask too many questions, and that is where my newest novel comes from. Apparently no amount of trouble seems to convince me to stop.

Tell us about your next release.
It's called Jane Austen Lied to Me. If it was a movie, it would be a romantic comedy.  There is an entire genre out there of Austenesque stories, but mine isn't simply a retelling of Pride and Prejudice. I have a modern college girl (I teach at the college level) who absolutely adores everything about Jane Austen. She desperately wants her life to be like one of Jane's novels. But now I start asking those pesky questions... what would happen if a modern-day Lizzie met someone who was really like Mr. Darcy? Does his money really excuse some of his behavior? What can possibly explain and excuse Darcy's behavior the first time we see him?

I ask similarly obnoxious and amusing questions of the characters in Northanger Abbey, Emma, etc. I don't touch on Sanditon or Lady Susan, most people are not very well-versed in those tidbits, and this story is only funny if you know your Jane Austen. 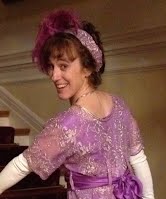 Jeanette Watts had been writing historic fiction when the inspiration for Jane Austen Lied to Me hit her on the drive home from the Jane Austen Festival. The idea was simply irresistible, and she put aside other writing projects in order to focus on writing a satire, thinking it would be a "mental vacation." It turned out to take every bit as much research to write a modern story as it does to write a historical one.

She has written television commercials, marketing newspapers, stage melodramas, four screenplays, three novels, and a textbook on waltzing.  When she isn’t writing, she teaches social ballroom dances, refinishes various parts of her house, and sews historical costumes. She has just relocated to Charlotte, North Carolina and is loving her new home town.

Posted by EverLeigh at 2:36 PM