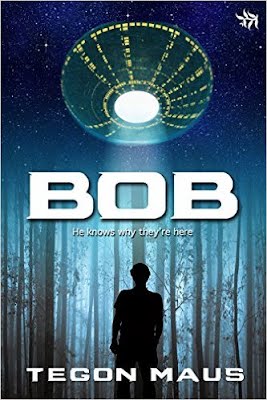 Veteran newspaper man, Peter Anderson’s career is slipping away. When he's sent to do a fluff piece about lights in the Arizona night sky, he discovers far more than he ever expected. His investigation leaves him with more questions than answers. The only thing he knows for certain, the only thing he can count on are the two words offered repeatedly by Bob, his friend and guide . . . “IS BELT

Review
Believeable and Relatable characters really help to captivate the reader and get them invested in the happenings of this story.

A journey into a new world that I can get behind. I liked the imagination shown by Tegon Maus. The character development and story development were definitely key and I believe he executed both very well.

I was raised pretty much the same as everyone else... devoted mother, strict father and all the imaginary friends I could conjure. Not that I wasn't friendly, I just wasn't "people orientated". Maybe I lived in my head way more than I should have, maybe not. I liked machines more than people, at least I did until I met my wife.

The first thing I can remember writing was for her. For the life of me I can't remember what it was about... something about dust bunnies under the bed and monsters in my closet. It must have been pretty good because she married me shortly after that. I spent a good number of years after inventing games and prototypes for a variety of ideas before I got back to writing.

It wasn't a deliberate conscious thought it was more of a stepping stone. My wife and I had joined a dream interpret group and we were encouraged to write down our dreams as they occurred. "Be as detailed as you can," we were told.

I was thrilled. If there is one thing I enjoy it's making people believe me and I like to exaggerate. Not a big exaggeration or an outright lie mine you, just a little step out of sync, just enough so you couldn't be sure if it were true or not.  When I write, I always write with the effort of "it could happen" very much in mind and nothing, I guarantee you, nothing, makes me happier.