Virtual Book Tour: Guy's Odyssey by Seth Bleuer with an #interview and #giveaway 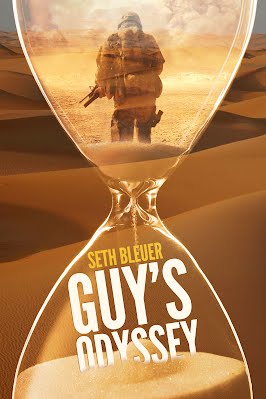 It’s just another day in Iraq for Guy, a young American soldier. But when he suffers a head wound in a car bomb attack in Baghdad his real journey begins.
As the blast sends him on a deadly odyssey through the very fabric of time, he finds the beautiful yet mysterious disappearing sand. But Guy quickly realizes things aren’t what they seem and he may be witnessing his own destruction. With the reality warp tearing him apart, he has only his fading mind and a mysterious journal to help him solve the puzzle before time runs out.
His desperate search for an answer leads him to a single moment where everything hangs in the balance. Does this mysterious journal hold the clues to his salvation, or is it the ramblings of a madman? Can he figure out the mystery and save himself, or is the end of his odyssey written before his journey even begins?

There are so many challenges when it comes to writing. Finding the time to write can be hard sometimes. It is also difficult to kill a character that you really don’t want to, but know that you have to.

Right now it is everything Chris Cornell. I grew up on his music and he inspired me in so many ways throughout my life. He was a great musician and human being. His passing is a huge loss for the world.

I have three very amazing critique partners that helped me through the entire process of writing Guy’s Odyssey. I don’t know what I would do without them.

I’m currently reading the John Carter of Mars series. The writing is phenomenal. Edgar Rice Burroughs was a true visionary and a master of his craft.

I initially started writing after my deployments to Iraq and Afghanistan as a way for me to say the things I couldn’t say and work through some of the really hard things I experienced. After a while I realized I could do that through Fiction, which I very much enjoyed writing, and the rest, well here we are!

Guy’s Odyssey is a psychological military thriller inspired by some of my own experiences in the Middle East. It’s about a young soldier, Guy, who gets blown up in Baghdad and is sent on a deadly odyssey through the very fabric of time where he finds the beautiful and mysterious sands of time. Guy wakes up in the future and finds himself in some serious trouble. He has only his fading mind and a mysterious journal to aid him in solving the mystery of how he got there before time runs out.

Seth Bleuer is an author and veteran who served combat tours in Iraq and Afghanistan. He currently lives near Seattle, Washington with his wife and kids, by way of the Midwest. When he’s not reading or writing he can be found playing in the mud at obstacle races with his wife, Amanda. To see what Seth is up to check out his very originally named website https://sethbleuer.wordpress.com/or find him on Facebook https://www.facebook.com/SethBleuerAuthor/

Purchase Links
on sale for $0.99 until June 26th and then goes up to $4.99!
Amazon
Barnes and Noble
Kobo
iBooks