Virtual Book Tour: The Blood of a Rose by @toddthiede #interview with the author 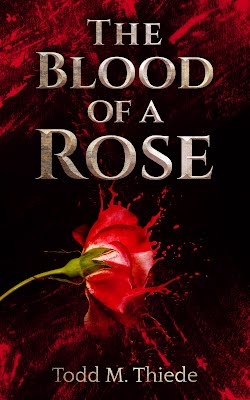 Jesse Fairlane is missing. Max Larkin and Special Agent Michaels are unsure if this is related to a recent case involving human trafficking or something else. On top of trying to locate his partner, Max has to make a decision as to whether he leaves Rockton to work with the FBI or stays to become captain at the local police department. As Larkin, Michaels, and the other detectives work furiously to find Jesse before it's too late, Max finds himself despairing they'll find her alive. He struggles to maintain his relationship with Veronica and trying to be a friend to Jesse's girlfriend, Melissa, all while following a maze of clues to Jesse.


What is the hardest part of writing your books?
My biggest challenge is time. It takes me about 6 months to write a full novel because of my full time job. I generally work about 50 hours a week or so.

I have mostly 1980’s Hair bands like Aerosmith, Bon Jovi, and Poison.

My first reader is always my wife. She can be tough but sometimes that’s needed.

. I read a lot when I was younger but between work, writing, being a husband, a father of four, and just recently I became a grandfather, there hasn’t been a lot of time to read.

I began writing in 2010. Its always been a dream of mine but I just needed the right characters and stories.

I am currently writing a book called “The Plastics” It’s my first dip into the horror genre and really am loving the story so far.

Perhaps you wouldn't characterize the Finance Manager of your local automobile dealership as an Amazon best-selling author--until you get to know Todd Thiede. He has worked for the past decade at Elmhurst Toyota, but Thiede is in the driver's seat as the writer of a murder mystery series featuring his hero Detective, Max Larkin. "Time Killer," which Kirkus Reviews deemed "a fast-paced thriller" that will "keep crime and thriller fans wrapped up in its twisting plot, fast pace and memorable detective,", "Lies To Die For" (which reached No. 1 on Amazon in the "Serial Killer" category), Miss Me? (3rd in the series) and Slashtag (4th in the series) are available via Amazon Kindle.
Go to www.toddthiede.com for more info on Todd and his books.

According to Kirkus reviews (the toughest book reviewer in the business):
A fast-paced thriller centered on a brutal, time-obsessed serial killer.
The expression "killing time" rarely means murder, but here, the victims of a serial killer must pay for time they've wasted, often with both their money and their lives. In a brutal scene from the opening chapter, an entire family is murdered after a stranger invades the family's home and accuses the patriarch of wasting his time. Veteran cop Max Larkin is on the case. Unfortunately, he's also been assigned a new partner; though she's green in the field--she has "very sad eyes" and prays upon arriving at the first crime scene--she gives the hardened old detective a new perspective he never knew he needed. But as the serial killer claims more victims, a pattern emerges that neither Max nor his new partner can ignore. With brisk pacing, Thiede's debut brims with action, violence and, occasionally, emotion. Though the book takes a while to find its heart, procedural fans will feel right at home. Larkin feels like a guy worth rooting for, despite filling the shoes of the beaten-down, grizzled, old loner cop trope a little too well. His interactions with his new partner, plus the twists and revelations regarding his past, give him enough of a pass to get readers invested in the story
and looking forward to his next outing. Larkin's story doesn't break any boundaries, but it'll keep crime and thriller fans wrapped up in its twisting plot, fast pace and memorable detective. Plenty of shock value and a charismatic, if formulaic, male lead.

Posted by EverLeigh at 4:27 PM