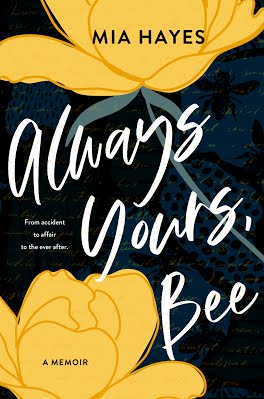 On a rainy November day, Mia Hayes' husband left for work on his Vespa. Normally, she would have driven him, but Mia was waiting on a phone call with an editor and didn't have time.

She never saw that caring, loving version of her husband again.

The fallout from his accident--Mia's guilt and her husband's PTSD, memory loss, and depression--consumed their lives over the next five years as her laid-back husband changed into an angry man with few memories of their past. Desperate to hold her fragile family together, Mia ignored her own unraveling and plunged into bipolar depression.

As she searched for answers to unanswerable questions, Mia moved her family from San Francisco to Paris, France before landing in a leafy Washington, D.C. suburb where she tried to find a fresh start only to become embroiled in a scandal of her own making.

Through ups and downs, mental illness and bad decisions, Mia struggled with what it means to be a good wife and mother, whether saving her marriage was worth the pain, and understanding that healing is a personal journey.

Always Yours, Bee is a heartbreaking yet triumphant and brave look at a woman, a marriage, and a family falling apart and coming out stronger. Told with clarity and introspection, it captures the terror of losing the person closest to you—yourself.

When the Laundry is Dirty and the Tea is Hot

These are two truths I know: people love gossip, and they love it more when it’s not about them.

I’ve been on both sides of that equation as a novelist who writes fiction about upper-middle class women in a country club neighborhood. My characters deal in gossip, secrets, and maliciousness, and not a single one is likable, and yet my readers love them.

But I didn’t begin publishing those books until eight years after my husband suffered a traumatic brain injury in traffic accident, and my life took a long slide toward rock bottom. At first, my Type-A personality had me running around after him, trying to clean up his messes and protect him from himself. Keeping a “normal” public appearance was my number one priority, and I filled Facebook and my blog with idyllic images and posts of our perfect life as I hid the spiral of chaos surrounding us.

The years that followed James’s accident were consumed by infidelity, a bipolar diagnosis, bad parenting decisions, and so many versions of self-harm and addiction that I’ve lost count. It was ugly, messy, and painful. And honestly, it’s surprising no one ended up dead. People were talking, but I was unaware because no one talked about it with me.

Eventually, after years of tears and therapy, I realized the characters in my novels were all versions of myself: a depressed woman dealing with infidelity; a mom looking for love; an embarrassed wife trying to figure out who she is. I had been trying to share my story through fiction, but my true story gnawed at me, begging me to be honest with myself and address the stories being told about me.

I needed to tell a raw and emotional story about how mental illness had attacked my family and me but didn’t win.

As I wrote my memoir Always Yours, Bee, my dueling desires to be uncomfortably honest about who I was and simultaneously protective of myself and my marriage resolved. I told my truths and my pain and tore back the picture-perfect social media façade I had nurtured. But after years of hiding what I felt were my faults, I feared how my deepest secrets would be perceived not just by my family and friends, but also the greater public.

And yet, I kept writing, because I believed others who struggled with mental illness or infidelity needed to know that they too could climb out of the seemingly unbearable misery. I wanted to be what I had needed: a light showing where the path to recovery started.

While writing, I realized didn’t need catharsis or revenge; what I had needed was distance to properly reflect on what had happened, and I needed time to make sense of things. Somehow, despite everything my marriage had healed. My children had flourished. And I discovered I wasn’t broken or unlovable.

That was the real story. Good grew from bad.

And so, with Always Yours, Bee, I spilled tea all over the white tablecloth and hung it out dirty for everyone to see. I put a face to the pain of mental illness and infidelity and claimed it as my own. I stopped pretending to be what I thought I needed to be and allowed myself to be authentically messy me.

Because this one thing I know: it’s easier to tell the truth than keep up the lies.

Mia is a notorious eavesdropper who lives in Northern Virginia, outside Washington DC, with her husband, sons, two cats, and Harlow the Cavapoo.

She drinks too much green tea, loves traveling, and has mastered the art of procrastination cleaning.