Frankie Shep is still mourning the deaths of her husband and young son when she finds a bone in the far corner of her Wyoming cattle ranch.

Excited to think she may have discovered an ancient Native American village, she takes the bone to a lifelong friend who is now a forensic anthropologist on contract with her county.

After a cursory inspection, he turns a blood-chilling stare at Frankie. The bone isn’t ancient. Worse, the victim could be the remains of Frankie’s mother. She disappeared from her own bed more than a decade ago.

And now her retired father is missing.

As Frankie digs deeper, she discovers the terrifying truth that a serial killer is using her land to bury his victims, all members of her family and inner circle.

And now he’s watching her.

Mystery Bones Murders is a story of love, heart-wrenching deception, and finding redemption.

What does it take to commit the perfect crime?

Delve into these dark and twisted tales by twenty USA Today and International Bestselling Authors.

No matter what kind of crime story typically catches your imagination, there’s sure to be something for everyone.

Conspiracies, political plots, and yes, even murder, are just a few of the crimes waiting inside this box set.

Discover a narcissistic grandmother running an underground syndicate, or a support group bent on murder…and even a serial killer who turns his victims into fairytale creatures.

Uncover the passion, jealousy, and fear lingering in every tale.

This box set is packed with thousands of pages that will hold you on the edge of your seat, crying for answers. 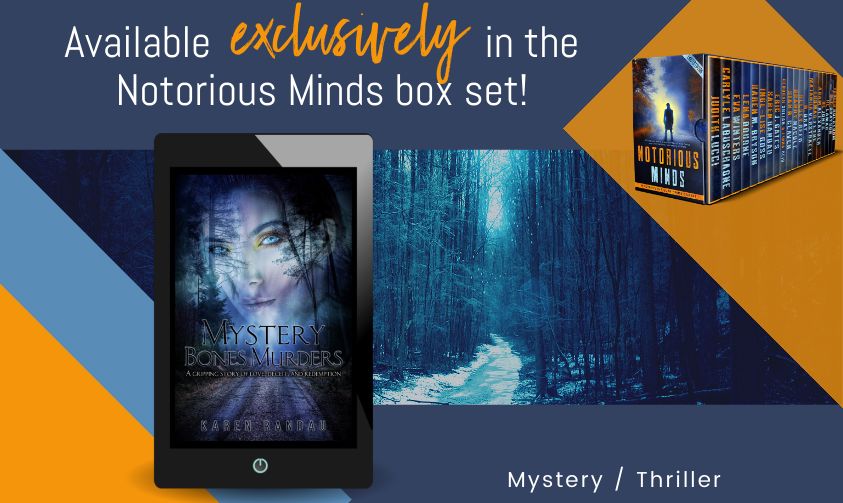 
The hardest part is getting started, which involves creating characters and the world in which they live. Then comes the outline, which is also hard. Then the writing, which is the most fun. I love it when the characters take over the story, but then I have to go back and revise the outline to figure out where we’re going next.

I like all kinds of music—everything from classical to jazz to country western to pop, but not metal. I like something upbeat for exercising and dancing but something quiet and inspirational for those peaceful moments when I just want to sit and think. When I need an inspirational moment in my writing, I listen to something that makes me feel the way my character is supposed to be feeling.

I believe critique partners and beta readers are essential to putting out a good book, so yes, I have them. We authors have spent so much time in our stories and with our characters that we’re blind to what might stand out to someone else. I like to connect with authors of other genres so I can learn from them things that I can apply to my mysteries, thrillers, and suspense novels.

I’m reading Jenny Milchman’s Second Mother. I love Jenny’s psychological thrillers and the way she brings her characters to life.

I started writing as soon as an elementary school teacher taught me to print. I’ve processed all of my life’s major events by writing about them. It was only logical that I get a degree in journalism, but I learned quickly that reporting wasn’t the thing for me. I enjoyed a long career in marketing communications and loved learning how to craft messages to reach people looking for what I offered. I started novel writing when my son came home from a Boy Scout camping trip and said he’d sighted a bigfoot. I asked myself why it was only the kids who got to see those things and not the mothers. I wrote a book to explain it—and am grateful it never got published. Writing, rewriting, and taking classes on novel writing helped me produce better books along the way. I learned even more with my Rim Country Mystery series, and now with Mystery Bones Murders as part of a set of mysteries and thrillers by 19 award-winning and best-selling authors.

Mystery Bones Murders is about a young widow who discovers a bone on a far corner of the Wyoming ranch she runs with the help of her foreman and his family. Excited it might be an ancient Native American, she takes the bone to an old friend who is now an anthropology professor at the University of Wyoming. She discovers the horrifying truth that a serial killer buries his victims on her land, and they’re all people who were close to her. And he’s now watching her.

The book is exclusive to the Notorious Minds Crime Mystery and Thriller Boxset being released by Fire Quill Publishers on October 13.

Karen Randau authors fast-paced stories with intricate plots and lots of actione. Her debut novel, Deadly Deceit, was the first in her four-book Rim Country Mysteries and has twice reached the #1 slot in Amazon's amateur sleuth category. The fourth book in the series, Deadly Payload, was a finalist in the 2019 Book Excellence Awards and the 2018 Beverly Hills Book Awards®. She was one of seven authors in the Tawnee Mountain Mystery Series with Deadly Reception and now is joining 19 other others in the Notorious Minds Crime Mystery/Thriller boxset.

A native of the southwestern U.S., Karen has traveled internationally and witnessed famines, violence, and hopeful people working to overcome abject poverty. She draws on both her creativity and personal experience to weave together an interesting cast of characters with rollercoaster-like twists and turns.

Posted by EverLeigh at 7:14 AM