After returning from a successful mission with the Knolan Shock Forces, Hāthar needs a break. With Arra his mate pregnant and he still recovering from his last mission, Hāthar has compelling reasons for sticking close to home. But newly developed stealth technology has enabled Knola’s enemies the Valdrōsians to ambush one of Knola’s Deep Space Fleets, inflicting heavy losses.

Intelligence has identified the facility from which the new technology originated. Developing countermeasures, however, will require a raid to steal the technology and abduct the stealth project managers. Having recently defeated just such a raid, Hāthar is asked to evaluate the feasability of the Knolan plan.

The plan is insanely risky, but Hāthar senses he is the best choice to lead it. With the fate of his adoptive home hinging on the success of the mission, he sets aside his personal preferences in favor of duty. Eryinath-5, The Dancer Nebula continues the chronicle of Knola’s thousand-year war with the Valdrōsians—and the coming climactic clash that will determine the fate of Earth and our corner of the galaxy. 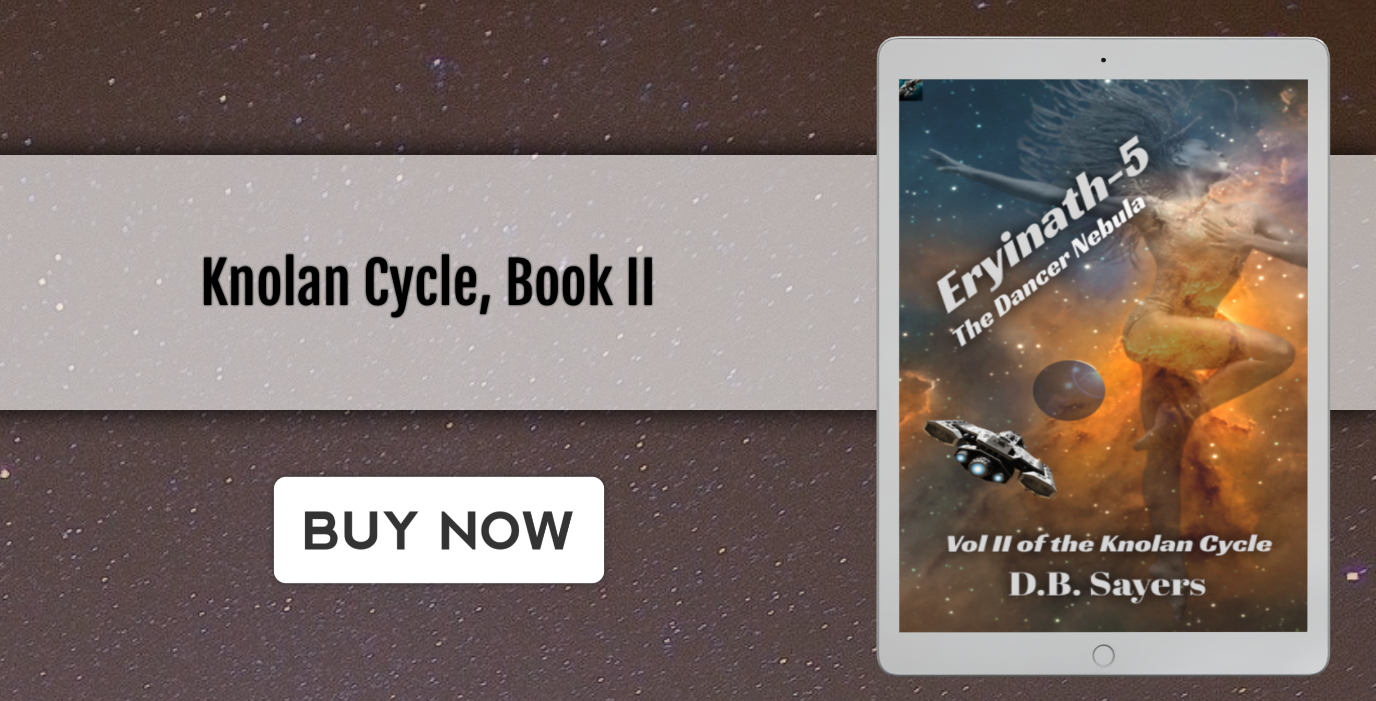 Most writers have an origin story on their path to becoming an author. What’s yours?

In every school, there’s the cool guy everyone wants to hang with, right? Yeah. That wasn’t me. Growing up, I was the introverted kid eating lunch by himself in the corner of the cafeteria and reading.

Somewhere along the way, becoming an author myself crept into my head. But through two adult careers, first as a Marine officer and later as a corporate trainer, I started more stories than I finished. Then in 2008, the company for whom I was working went into Chapter 11. I was one of many they cordially invited to leave and not return. So while I interviewed for my next job, I worked on the novel I’d already started. My first novel, West of Tomorrow, was the result. Since then, I’ve published four more.

Did you have an author who inspired you to become a writer?

Technically, no. My grandfather had a Byline with the Associated Press, and it was he who sensitized me to the potential impact of an elegantly turned phrase. But there are certainly other authors who have influenced my own work. Heinlein, Assimov and John Scalzi (of Old Man’s War fame) and Kevin O’Donnell’s Fire on the Border for science fiction. I loved and have read and re-read Charles E. Israel’s Rizpah, a historical novel set in biblical Israel. But I think the book that made me yearn most for self-expression was Frank Yerby’s An Odor of Sanctity. That story haunted me when I finished it the first time and I still go back to re-read it, all these years later. What he did philsophically in that story was soul-shaking. Of all his novels, I’m not sure that Odor of Sanctity wasn’t his best—and one of the best historical novels I’ve ever read.

How long did your first novel take?

From first draft to release it was almost five years. Life kept getting in the way and it was literally my first serious attempt at long-form fiction. I’d successfully authored several technical and training publications both as a Marine officer and later as a corporate trainer, but I’d never completed a full-length novel before. To really live for the reader, fiction needs to reveal truths differently than non-fiction. It’s quite a shift in mindset and it didn’t happen overnight, for me.

What is your biggest challenge now in writing?

It’s the muddy middle. I’m a plantser, by which I mean I begin a story with a theme in mind and the general outline of a story. So I start out thinking that I know where I’m going. But you’ll note I said general outline? Somewhere around the mid-point, the pantser in me takes over. I get a hair fire somewhere along the way and start playing with the possibilities in characters and situations. It doesn’t always work, and it sometimes requires some serious editing.

Did that happen with Eryinath-5, The Dancer Nebula?

Oh yeah. I think that comes with the territory when we’re writing science fiction. By definition, science fiction is both storytelling and world-building. How you provide the details making that world real for your reader while you keep the story moving is always a balancing act.

If Eryinath-5 is the second book in the series, didn’t you get a lot of that world-building out of the way in the first book?

At first blush, you’d think so, right? But in subtle ways, I struggled more with Eryinath-5 than with Tier Zero, the first book in the series. For starters, Tier Zero intentionally asks but does not answer some of the mysteries of Knolan culture. Marty, the protagonist in both books still has a lot of questions by the end of book one. This includes the Knolans’ deeper motivations for making contact with Earth. Additionally, book two develops the Knolans’ implacable enemy the Valdrōsians in more detail. Readers begin to sense why the endless war between the Knolans and the Valdrōsians is so bitter, as well as to appreciate Earth’s vulnerability if the Valdrōsians prevail. And the question of Knola’s interest in Earth becomes more nuanced as events unfold.

Your battle scenes in both Tier Zero and Eryinath-5 have a stark realism to them, even taking into account that the weaponry is more advanced than ours. Is that you tapping into your experience as a Marine?

Absolutely. I wanted to avoid sanitizing war. However necessary it may be, armed conflict is an ugly business. Especially when it gets personal. And after a couple thousand of our years, for both the Valdrōsians and the Knolans it’s all very personal. I’ve attempted to add a flavor of its cost, even for the side that objectively prevails, most especially what it does to us as humans.

Circling back to something you said earlier—specifically the Knolans’ and the Valdrōsians’ interest in Earth. Nuanced, I think was how you described it. Can you elaborate on that without dropping a spoiler?

Sure. If you have to choose between the Valdrōsians or the Knolans for neighbors, you’d want to pick the Knolans. But it would be naive to attribute absolute altruism to the Knolans’ interest in Earth. Their philosophy as well as their plans for this corner of our galaxy make them logical allies for Earth—or Kurrithäal as they call it. But readers should be wondering if it’s significant that Knolan contact with Earth has thus far been clandestine and limited to the receptive.

In both Tier Zero and Eryinath-5, the Way figures prominently in Knolan culture. But I’m still a little fuzzy on whether it’s a religion or atheistic philosophy. Which is it?

Great question. It depends on the Knolan you ask. Some Knolans believe in what they call the Universal Consciousness. Their intellectual humility resists the temptation to characterize something they sense but don’t fully comprehend. That said, some Knolans clearly believe the Universal Consciousness has both an overarching purpose and a morality. In that sense it acts like a religion. But just as the Knolans leave it up to the individual to decide which it is for them, I leave it to the reader to interpret it within the context of the story.

I did and still do. You’ve correctly identified the two most difficult parts of both books—at least for me. But there was really no way to avoid it. The differences between Knolan, Valdrosian and Earth sexuality is an important part of the story. As are the deeper philosophical and thematic threads. The balance between philosophy, armed conflict and the cultural contrasts associated with physical love are part of what I hope makes this story compelling.

Eryinath-5 picks up where Tier Zero leaves off. And while Eryinath-5’s ending ties off this episode in the story well, the reader is left with the notion that there’s more to come. Any idea when volume III will be out?

I’m plotting volume III while I finish The Year of Maybe, the second book in the Nyra Westensee series I’m working on at the same time. My target for publishing volume III is sometime in late 2022 or 2023.

Eryinath-5 also leaves the reader with the impression that both Knola and Earth may be in peril. Can readers expect that peril to unfold in volume III?

In a big way. The clandestine nature of the struggle between the Knolans and the Valdrōsians predictably spills out into the open, forcing Earth humans to choose a side. Unfortunately, not everyone on Earth agrees with respect to who the good guys and the bad guys are, from our perspective. But like it or not, we’re going to have to choose and do so with incomplete information. And as in real life, the choices we make are certain to have consequences, both individually and collectively.

Dirk’s path to authorship wasn’t quite an accident, but almost. It’s not that he didn’t write. He did. Still, through two previous careers, first as a Marine officer and subsequently as a corporate trainer, Dirk started way more stories than he finished. But in the backwash of the 2008 financial meltdown, his employer filed for Chapter 11. Cordially invited to leave and not return, Dirk found himself out of work and excuses.

Since then, Dirk has published West of Tomorrow, Best-Case Scenario, Act I of Nyra’s Journey, a collection of short fiction entitled, Through the Windshield and Tier Zero, Vol I of the Knolan Cycle. All are available from Amazon in paperback and Kindle. His latest work in progress is The Year of Maybe, Act II of Nyra’s Journey, due out in 2022.