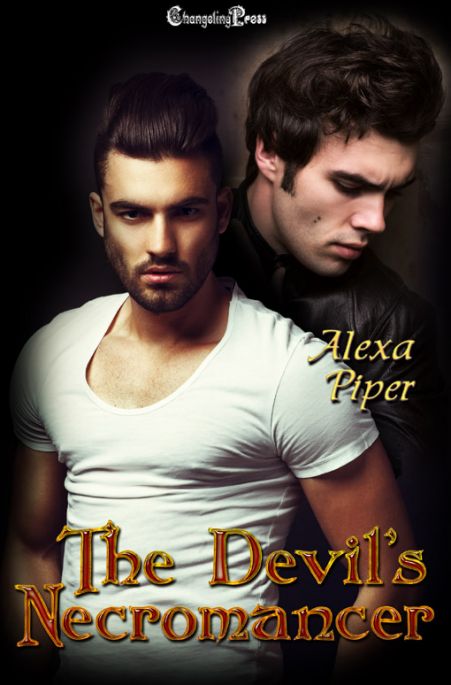 Lionel, a necromancer and consultant for the Brunswick Police Department, wants nothing to do with immortals. Specifically, he wants nothing to do with Lucifer, who shows up on his doorstep one day with a ridiculous proposal. Lucifer, also known as the Devil, wants Lionel to be his pretend boyfriend. Except the pretend part is something the Devil doesn’t really seem to care for.

Lucifer has read enough romance novels to know that a good dose of forced proximity might be just the thing to get the stubborn necromancer he desires into his bed. The Devil’s plans are soon complicated when Lionel proves more uncooperative and oblivious to love than Lucifer could ever anticipate.

While the Devil wants to claim Lionel, all Lionel wants is to get away from Lucifer. Meanwhile, magic users are being murdered in the city. Lionel cannot escape the implications of those murders for long, and the case soon takes a different turn. Will Lionel be able to escape the Devil’s thrall, or will the necromancer fall for the immortal seducer?

It was past midnight, and the stars that looked like sprinkles of white chocolate in the velvety dark night sky were overshadowed by the city lights and the waxing moon. I lay on the embankment, North Bridge’s metal frame rising just to my right and further hiding the chocolate sprinkle stars. My feet were wet, but I didn’t mind, not the embankment or the wet feet or the stars melting away in the light and the artificial structures around me. The zombie was oozing all over me from its -- his -- caved-in skull, and I did mind that. Zombie ooze was a bitch to get out of clothes, even if I’d given up on wearing colors years ago. Black simply was the safest bet for a necromancer.

Zombies reeked when they weren’t really fresh, and this one was ripe -- fish-market-in-the-summer-heat-three-days-after-closing ripe. I looked up and considered my life choices, all of which had led me here.

“Do you need CPR?” someone said. It was a warm, manly voice, and I was reasonably sure it could make chocolate melt, star-shaped or otherwise.

I stuffed my self-pity away and turned my head to get a better look at the speaker. He was as handsome as a devil, with skin that looked like marble in the glow of the city at night. His hair shimmered liquid black, but it might have been some shade of brown in proper lighting. It went well past his ears and looked styled with care to get that messy, I just got up out of bed after a night of hard fucking look.

“Why the fuck would I need CPR?” I asked. My voice didn’t sound like I’d just considered crying a moment ago, and I was proud of that.

The guy shrugged. “It’s hard to tell with humans. Your kind is so accident prone, and you seem to be having trouble breathing. Or maybe you hit your head? Do you remember how you got here?”

Did he fucking think I was suffering from amnesia or a head injury or something? “I’m having trouble breathing because I have a fucking dead zombie on my chest, asshat,” I said. In my considered necromantic opinion, I was being perfectly polite, even though I couldn’t be sure what kind of creature the guy was. I’d given him a quick glance with my mage sight, and human he was not.

“All zombies are dead,” Mr. Sexy said. “It’s a prerequisite. This one seems to have had its brainstem properly destroyed, however.”

“Oh, smarty-pants, thanks a bunch for the lecture. The basics of necromancy have ever escaped me, even after I raised my very first corpse thirteen fucking years ago.” It had been a blackbird that had died when he crashed into a window at my school. I had cradled the poor thing in my hands as it breathed its last, had cried, and that had triggered my necromancer power. Pretty boy did not need to know that. Every other person I’d ever told had made fun of me for it.

“You could have suffered a head injury with amnesia. How am I supposed to know what you know?” He walked toward me. His movements were silent, cat-like, and more elegant than was right. Even despite the zombie oozing out on me, my cock couldn’t quite ignore him. Seriously, though, what was up with his fixation on first aid and amnesia?

He grabbed the zombie by the legs and pulled the dead-dead corpse off me. “Oh. You caved in its skull with a rock,” he said when he saw the murder weapon in question, the goo glistening on its stony surface. Well, it wasn’t really a murder weapon, seeing as how the zombie had been dead, but details. “How traditional.” He held out a hand to me, and I took it and let him pull me back to my feet. “I’m Lucy, by the way. Short for Lucifer, but I prefer Lucy. As in Lucy Westenra, the woman who almost single-handedly turned Dracula into the first reverse harem romance novel ever before she made the wise decision to claim immortality instead. She was such an underrated character, and I really don’t know why people don’t like her more.”

I dusted myself off. Didn’t help with the wet feet or the zombie ooze, which I really only distributed, like soft butter on hot toast. The shirt I was wearing was ruined. Good thing I had a dozen other plain black shirts just like it back home. “Maybe because she fucking ate children.”

He shrugged. “Well, everyone has a craving now and then. No one judges women’s monthly chocolate cravings, and I don’t see how that was so much worse.”

My brain caught up with the conversation. Lucifer? The Lucifer? The fucking Morning Star, seducer of stuffy virgins and lover of apples? I looked at him. Up at him. Asshole was tall and handsome, the kind of guy I could only ever talk to with about three drinks in me. “You’re the Devil? Satan? Beelzebub?”

“Lu-cy,” he said, slowing down as if he was reconsidering the brain damage thing. Even his eyebrows were perfect, which I only noticed because he pulled one of those up, something most people couldn’t do in real life. He could. And he looked hot doing it. Hotter.

Alexa Piper writes steamy romance that ranges from light to dark, from straight to queer. She’s also a coffee addict. Alexa loves writing stories that make her readers laugh and fall in love with the characters in them. Connect with Alexa on Facebook or Instagram, follow her on Twitter or TikTok, and subscribe to her newsletter!